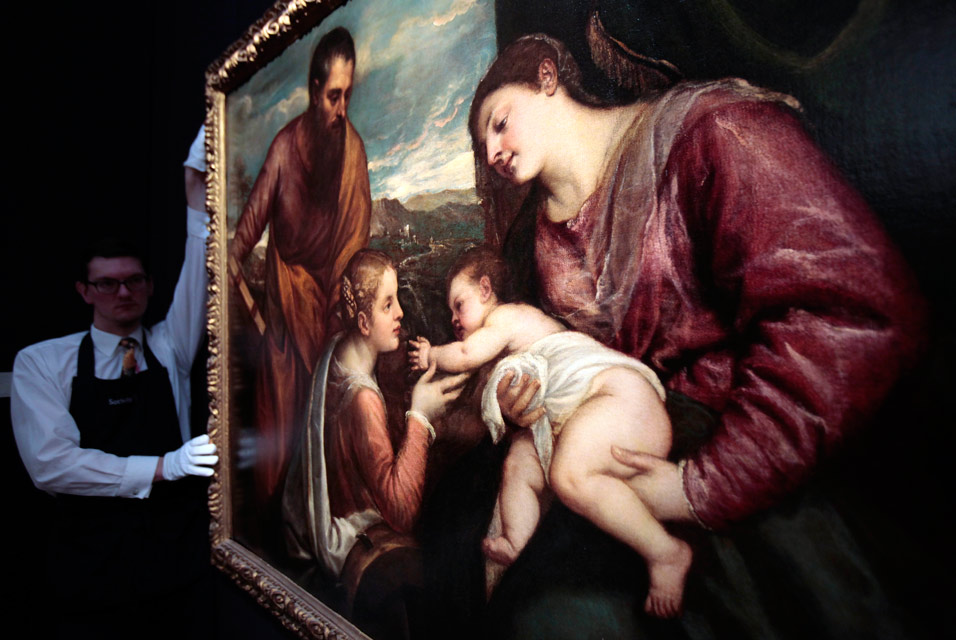 NEW AUCTION RECORDS SET FOR 16 ARTISTS  INCLUDING THE RENAISSANCE MASTER TITIAN, WHOSE A SACRA CONVERSAZIONE SELLS FOR $16.9 MILLION

Sotheby’s 2011 Old Masters Week auctions in New York have achieved an outstanding $109.2 million thus far, with one auction remaining tomorrow morning at 10am. Today’s sale of Important Old Master Paintings & Sculpture brought $90,626,878, just shy of the high estimate of $91.8 million. The sale was led by the Renaissance master Titian’s A Sacra Conversazione: The Madonna and Child with Saints Luke and Catherine of Alexandria, which sold for $16.9 million to a European private collector and broke a 20-year record for the artist at auction. The sale set 16 artist records in total, and saw incredible results for important works by Claude-Joseph Vernet, Joachim Wtewael and Gerrit Dou. Yesterday’s morning sale of Old Master Drawings saw its cover lot, Perino del Vaga’s Jupiter and Juno, sell to the Metropolitan Museum of Art for $782,500, while the evening sale of Important Old Master & 19th Century Paintings from the Collection of Jacob Elie Safra set seven new artist records.

“Following a dominant year in the field of Old Master Paintings in 2010, Sotheby’s is again off to a remarkable start,” said George Wachter, Co-Chairman of Sotheby’s Old Master Paintings Department Worldwide. “Today’s exceptional total of $90.6 million included historic world-record prices set for Titian, Vernet, Brueghel, Wtewael, Dou, Van Vliet and Perino, works that in many cases were sought-after by multiple bidders. In our morning session, which brought $78.6 million and exceeded its pre-sale estimate, interest came from all over the world and all over the field – the trade, private collectors and institutions. Clearly, this is a very strong market, particularly for masterworks.”

Important Old Master Paintings & Sculpture – 27 January Today’s sale realized many other exceptional prices that far exceeded pre-sale expectations. Property of the Beaverbrook Foundation was led by Claude-Joseph Vernet’s A Grand View of the Sea Shore Enriched with Buildings, Shipping and Figures, which brought $7,026,500 above a high estimate of $2 million, far surpassing the previous artist record of $3.8 million, achieved by a pair of works. Additional property from the Beaverbrook Foundation performed strongly this morning, with two works by Boticelli selling for multiples of their high estimates: Christ Bearing the Cross brought $722,500, while The Resurrection sold for $662,500. The morning session set auction records for works by iconic artists Joachim Wtewael, Gerrit Dou and Pieter Breughel the Younger. Wtewael’s oil on copper work Adam and Eve achieved $6,242,500, more than five times its pre-sale high estimate of $1.2 million. A perfect Mannerist demonstration of facility and grace, the remarkable work was previously unknown and has only now come to light. An Elderly Woman, Seated by a Window at her Spinning Wheel, Eating Porridge by Dutch Golden Age artist Gerrit Dou also exceeded expectations in selling for $5,346,500. An early painting by the artist, Dou continued to use its basic compositional form throughout the remainder of his career. Pieter Breughel the Younger’s Return from the Kermesse brought $4,562,500. The present work is one of the finest known versions of this composition, which was very popular during the artist’s lifetime. The scene depicts a merry procession of villagers returning from a kermesse, still in the throes of revelry.

In addition to Property of the Beaverbrook Foundation, institutional offerings were highlighted by a group of works sold by the J. Paul Getty Museum to benefit future paintings acquisitions. The property totalled $3,683,875 (est. $1.4/2.1 million) and was led by The Master of Pratovecchio’s The Madonna and Child Enthroned with Angels and Flanked by Saint Bridget and the Archangel Michael that sold for $902,500, more than three times its high estimate. In addition, Property of the Cleveland Museum of Art sold to benefit future acquisitions brought $1,051,500, almost double pre-sale estimates. Institutional buying was also strong, led by the Metropolitan Museum of Art’s purchase of Perino del Vaga’s The Holy Family with the Infant Saint John the Baptist for $2,098,500. The work set a new auction record for the artist, just one day after Sotheby’s Old Master Drawings sale broke the record for del Vaga with Jupiter and Juno, also sold to the Metropolitan Museum (see below).

The afternoon session of today’s sale saw several impressive prices for sculpture and works of art. The session was led by The Stowe Cistern: A Massive George I Silver Two-Handled Wine Cistern, Jacob Margas,

London, 1714 that sold for $1,142,500. The imposing English cistern is one of only eight known to have survived from the reign of George I. Property from the Abbott Guggenheim Collection in New York included An Italian Marble Relief of the Madonna and Child, by Domenico Rosselli, circa 1480 that brought $566,500, above a pre-sale estimate of $300,000.

The serene and charming relief appears to be the marble from which the polychrome stucco relief of the same composition in the Victoria and Albert Museum, London was made.

Old Master Drawings – 26 January Yesterday morning’s sale of Old Master Drawings brought $4,540,689 in total and was led by the cover lot Jupiter and Juno by Perino del Vaga, one of Raphael’s greatest pupils and associates, which more than doubled the previous record for the artist at auction in selling for $782,500 to the Metropolitan Museum of Art. The work is an elaborate preparatory design for a renowned series of tapestries known as Furti di Giove that was commissioned by Andrea Doria, a nobleman and associate of Emperor Charles V. The drawing has not been seen by scholars in modern times, and ranks as the finest such design to come to the market in a generation.

The auction was also highlighted by Rembrandt van Rijn’s small but powerful compositional study Judas Returning the Thirty Pieces of Silver from 1629, which sold for $722,500 to an American private collector. The drawing offers a fascinating look at the tortuous process by which Rembrandt arrived at the final composition for his early masterpiece of the same name. A second preliminary sketch for the painting was discovered on the back (or verso) of the drawing upon its consignment to Sotheby’s, adding another exciting layer to the work.

Important Old Master & 19th Century Paintings from the Collection of Jacob Elie Safra – 26 January Yesterday’s evening sale, composed of paintings acquired by Jacob Elie Safra for his personal collection between 1988 and 2001, brought $12,389,000 in total. The auction set seven new artist records, including one for the lead lot of the sale: Hendrick Maertensz. Sorgh’s Musical Company, which sold for $1,762,500. The central focus of the work is a group of five elegantly dressed people in a spacious interior making music. This type of subject is relatively rare in Sorgh’s oeuvre, which mainly consist of peasant subjects, the kitchen and market scenes.

Another highlight of the sale was Maria van Oosterwijck’s Still Life of Roses, Carnations, Marigolds and Other Flowers with a Sunflower and Striped Grass, which brought $1,426,500 and exceeded its high estimate. Van Oosterijck was reputedly a slow worker and as a result paintings by her are rare. However, she had a considerable royal clientele, including Louis XIV, King Jan Sobieski of Poland, and Emperor Leopold I. Zeeland Man-of-War in a Calm of a Jetty, a Rowing Boat in the Foreground by Willem van de Velde also exceeded expectations in selling for $902,500. Van de Velde was one of the foremost seapainters of the mid-17th century, and this rare and unpublished penschilderingen ranks among his earliest-known works in the medium.