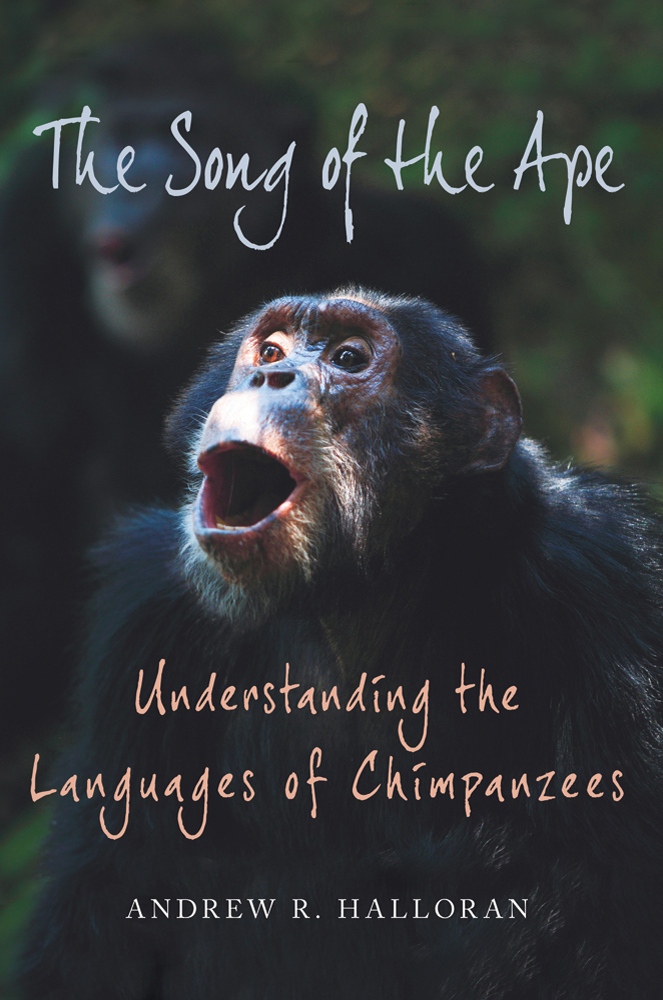 An absorbing investigation of chimpanzee language and communication by a young primatologist.

While working as a zookeeper with a group of semi-wild chimpanzees living on an island, primatologist Andrew Halloran witnessed an event that would cause him to become fascinated with how chimpanzees communicate complex information and ideas to one another. The group he was working with was in the middle of a yearlong power battle in which the older chimpanzees were being ousted in favor of a younger group. One day Andrew carelessly forgot to secure his rowboat at the mainland and looked up to see it floating over to the chimp island. In an orchestrated fashion, five ousted members of the chimp group quietly came from different parts of the island and boarded the boat. Without confusion, they sat in two perfect rows of two, with Higgy, the deposed alpha male, at the back, propelling and steering the boat to shore. The incident occurred without screams or disorder and appeared to have been preplanned and communicated. Since this event, Andrew has extensively studied primate communication and, in particular, how this group of chimpanzees naturally communicated. What he found is that chimpanzees use a set of vocalizations every bit as complex as human language.The Song of the Ape traces the individual histories of each of the five chimpanzees on the boat, some of whom came to the zoo after being wild-caught chimps raised as pets, circus performers, and lab chimps, and examines how these histories led to the common lexicon of the group.

Interspersed with these histories, the book details the long history of scientists attempting (and failing) to train apes to use human grammar and language, using the well-known and controversial examples of Koko the gorilla, Kanzi the bonobo, and Nim Chimsky the chimpanzee, all of whom supposedly were able to communicate with their human caretakers using sign language.

Ultimately, the book shows that while laboratories try in vain to teach human grammar to a chimpanzee, there is a living lexicon being passed down through the generations of each chimpanzee group in the wild. Halloran demonstrates what that lexicon looks like with twenty-five phrases he recorded, isolated, and interpreted while working with the chimps, and concludes that what is occurring in nature is far more fascinating and miraculous than anything that can be created in a laboratory.

The Song of the Ape is a lively, engaging, and personal account, with many moments of humor as well as the occasional heartbreak, and it will appeal to anyone who wants to listen in as our closest relatives converse.